Bertinoro, the balcony of Romagna! This is what you can find in most of the touristic websites that describe this little borough that you see up in the hills, driving the Via Emilia Southbound.

A very true fact, but for sure this lovely place is much more than this. Leaving the main road, a flat area with nothing else than firms and industrial plants, climb the street following the green line of the many vineyards that circumnavigate the sweet moves of the hills of Bertinoro. People call it the Spungone, the local name for sponge, a millennial area made by a shell stratification happened along the centuries.

The legend of Galla Placidia and Bertinoro

This is one of the best wine area in Romagna. Sangiovese and especially Albana, are one of the reason why local people and tourists come here in the summer nights, when the fresh and sweet air caresses the narrow streets of the borough and the suffused lights of the ancient street lamp, light the lovers.

It’s nice to be romantic sometimes! The history of Bertinoro starts from a glass of wine, a beautiful woman and a voyage. The legend says that Galla Placidia, daughter of Emperor Theodosius, passing through these places, tasted a wine served in a humble clay cup. The wine was so tasty that she said “Not so rough goblet are worthy, or wine, but drink you in gold” (the translation of Berti in oro, Berinoro).

What ever this legend may be true or not, the fact is that Bertinoro is a welcoming place since its birth. And it is not surprising that exactly in this place, every year, for the last 90 years, the village celebrates its essential soul, through the Feast of Hospitality.

A traditional festival dedicated to hospitality, dating back to an ancient tradition. It was in 1200 that was erected the “Column of the rings”, hospitalitatis monumentum, with as many rings as the families of the time, to which the foreign who arrived in the main square, attacked their horse, thus becoming host of the corresponding family. Since then, this habit is the main essence of Romagna people.

Every year, a special committee, nominates the official guests. The envelopes with the names of the guests and the name of the families are hang to the rings of the column. During a public ceremony, every guest is called to detach each an envelope from the column and throughout the day they are guests of the family corresponding to the envelope. The edition of 2016 was dedicated to women vote with a special exhibition of Miria Malandri.

Being a guest in Bertinoro

And this is what happened to me this year. I was honored by the Major of Bertinoro and was a guest of Loretta and Widmer of Cabevilacqua. But I will dedicate a later post to them. 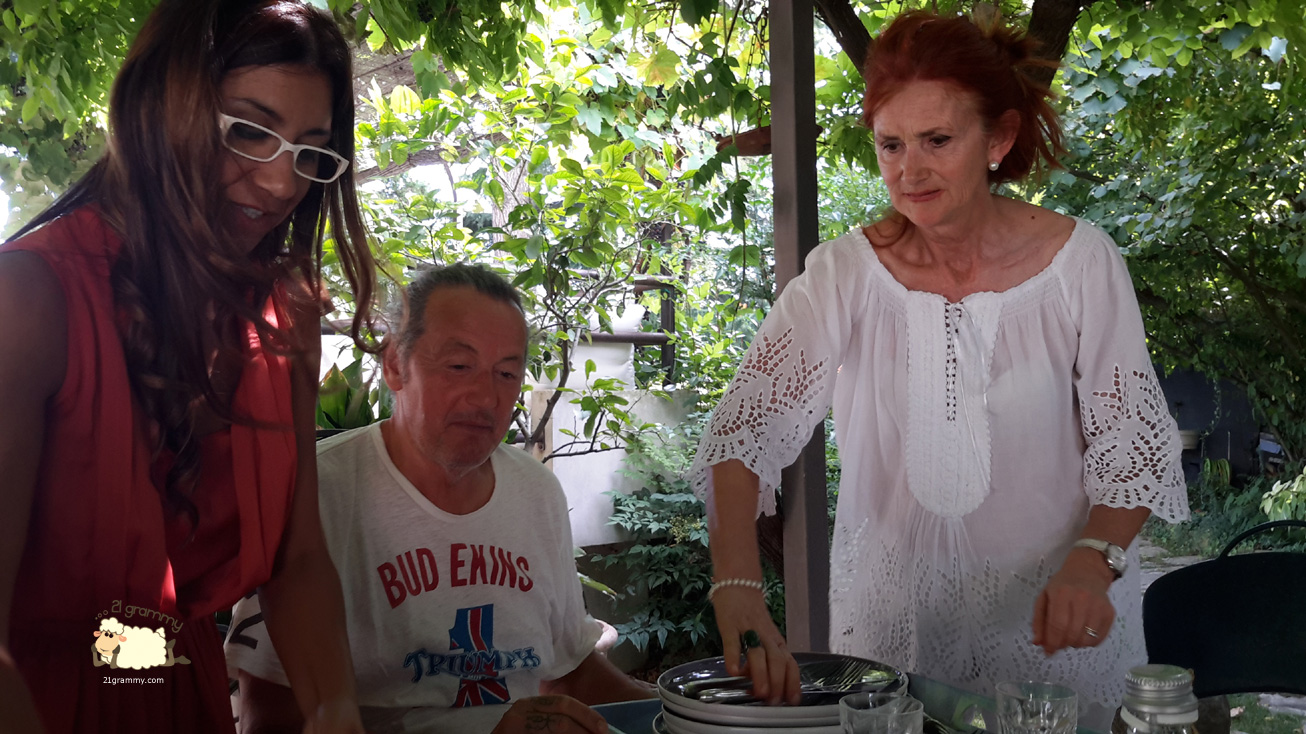 Bertinoro is not only a wine paradise. Arriving at the borough, go up to the castle, a Rocca built in 995 to defend the original village from the barbarian invasion. As defensive castle, this was a military presidium, with walls and towers and a well equipped army. The strategic position of Bertinoro and the visible control of the surrounding flat towards the sea, made it a quarreled place. The families of Forlì and then the Malatesta, coming from Cesena, governed Bertinoro until the Church domination that lasted three centuries.

The castle is now a University centre and also hosts a unique museum in Europe, the Inter Religion Museum, that gathers objects and symbols of the three monotheistic religions and is also a study centre.

Leave the castle, and walk along the main street: on your left the ancient church of San Silvestro, projected and built in 1740 and now a meeting centre. Keep on walking, your direction is the main place of Libertà, where you will find the important Palazzo Municipale, built in 1306 following the will of Pino Ordelaffi.

Since then it became the seat of the municipality. Here you can visit two halls: the Hall of the People, and the Hall of Fame, better known as Sala Paintings because inside it keeps the cycle of paintings dedicated to the history of Bertinoro, by the painter Antonio Zambianchi. The Piazza della Libertà also has a Clock Tower, which in the past, due to its considerable height, served as a lighthouse for sailors.

The square is a sort of balcony that allows you a beautiful sight on the Adriatic coast, especially when the day is clear. Take your time to breathe and stop for a glass of wine and then keep on strolling. Lose yourself in the narrow alleys that climb the village from the square.

There are two roads that are worth a visit: the road of harvest (Via della Vendemmia) and that of Disappeared Crafts (Via dei mestieri scomparsi) . These are two streets of the village where local artists display their works in a stable way and represent two different themes: the first is via Vendemini, this is an alley about 100 meters in which seven paintings represent the highlights the harvest; the second one, located at the beginning of Via delle Mura, shows six paintings by contemporary artists celebrating the ancient traditions of Bertinoro and manual skills of its inhabitants.

If you still have time, do not miss the lights of the sunset and discover those little spots that make this place so enchanting!

Before the evening comes, take a chance to eat in one of the many restaurants of Bertinoro: slow food, good wine and a special atmosphere!

Disclosure: I would like to thank the Municipality of Bertinoro, the Major Gabriele Fratto and the Alderman for Tourism, Mirko Capuano, for welcoming me and making me spend such a lovely day. I would also like to thank Arianna and Serena, the two ladies of the tourism office of Bertinoro, Loretta and Widmer of Cabevilacqua for the nice lunch and the warm atmosphere. Info https://www.facebook.com/ufficioturistico.bertinoro/

Ravenna: history and nature. A new way to discover the town

Biking Bologna: what you have never seen by feet

The colors of the wind. Kites in Cervia

The lute maker of Romagna: the history of Luigi Lombardi